SHAC grew from the Axe the Housing Act Summit held on the 26th November 2016. The summit brought together campaigners across a vast range of housing tenures, including council, private and housing association landlords, cooperatives, boat dwellers, and homeless people. It was a force through which the growing housing crisis was highlighted. 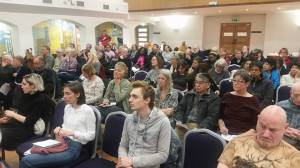 The Unite Housing Workers Branch had been invited to host a workshop on housing associations. At the workshop, it was clear that there was a strong appetite to create some form of network so that residents and tenants could learn from each other and build solidarity. There was also a strong imperative to create links with workers who were involved in industrial disputes with their housing association employers. The Housing Association Workers and Residents Network was formed, and has continued to be sponsored by Unite.

By June 2018, the Network had grown sufficiently to relaunch as SHAC (Social Housing Action Campaign) with a small committee of activists.